A tiny bone is changing how we think about Neanderthals 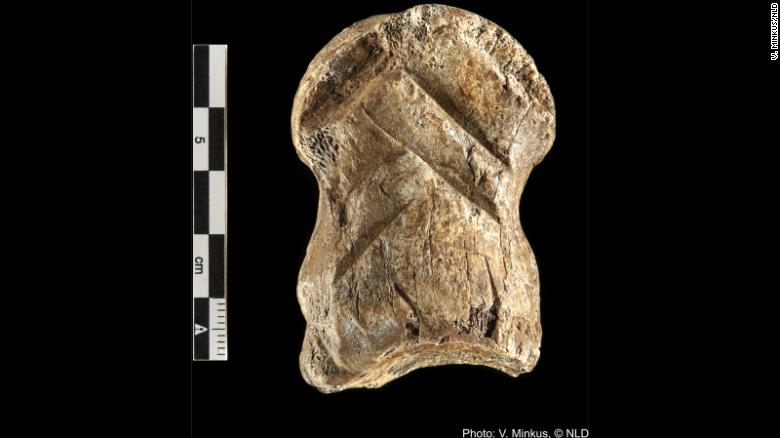 A tiny piece of bone that once belonged to a giant Ice Age deer is changing how we think about Neanderthals.

Found in Einhornhöhle cave in northern Germany, the decorated deer phalanx, or toe bone, features an engraved geometric pattern and has been dated, using several techniques, to at least 51,000 years old.

It refreshes the debate over to what extent Neanderthals, the heavily built Stone Age hominins that disappeared about 40,000 years ago, were capable of artistic expression and symbolic thought and whether they developed these skills themselves or through interactions with early modern humans, who first arrived in Europe around this time.

"The phalanx from Einhornhöhle with its stacked offset chevrons represents one of the most complex cultural expressions in Neanderthals known so far," according to a study that published Monday in the journal Nature.

The team of German researchers said the small bone appears to be of no practical use, and the chevron design, with its three uniform parallel lines appears to be intentionally created -- perhaps as a personal ornament.

"The choice of material, its preparation before carving and the skilful technique used for the engraving are all indicative of sophisticated expertise and great ability in bone working," said Silvia M. Bello, a researcher at the Centre for Human Evolution Research, Department of Earth Sciences, at the Natural History Museum in London, in a commentary that accompanied the paper. She wasn't involved in the research.

"The presence of incisions artistically arranged in a chevron pattern on the bone of a giant deer, supports the symbolic meaning of this find and raises new questions about how complex Neanderthal behaviour might have been."

The bone was from a giant deer, an animal that researchers described as "very impressive," but also one that would have been very rare north of the Alps at the time. Choosing the giant deer bone as the raw material emphasizes the special character of the object and supported that it had a symbolic meaning, they said.

The decorated bone was found in the former entrance to the cave about 1 meter behind the person holding the staff in the right of the image.

To understand how the object was made, the researchers made their own versions using stone blades from Baltic flint and carved five bones belonging to Limousin cows. The bones were treated in different ways: one was fresh, another was room dried and a third was dried in the open air, while bone four was boiled once and bone five was boiled twice.

"The fresh bone... it didn't really work out. The bone was really hard. We were constantly slipping with the tools," said Dirk Leder, a research associate at the State Service for Cultural Heritage Lower Saxony, Hannover, Germany, and an author of the study.

Leder and his colleagues found that the boiled bones offered a softer "mellow" surface to make controlled incisions in a way that closely resembled the original item. They said it took around one-and-a-half hours to make the object using a combination of cutting and scraping.

The earliest evidence for cultural innovation and artistic expression among early modern humans emerged in Africa and dates back to around 100,000 years ago -- where we see we see tools made from material other than stone, such as bone, ivory and antlers, shell bead ornaments, and advancements including the use of pigments, cave art and deliberate burials.

Although scarcer, archeologists have uncovered similar technological and cultural innovation at Neanderthal sites in Europe. These include ornaments such as talons from birds of prey, tooth pendants and evidence of funerary behavior. At some cave sites in Spain, there's evidence -- albeit contentious -- that Neanderthals created abstract motifs and hand stencils.

Homo sapiens are thought to have first arrived in Europe about 45,000 years ago and overlapped with Neanderthals for thousands of years. During that time, the two groups encountered each other -- sometimes having sex and babies, leaving traces of Neanderthal DNA in our genes.

Given its age, the study authors said they believe the engraved deer bone was of "independent Neanderthal authorship" and not linked to any interactions with Homo sapiens.

However, the Natural History Museum's Bello said more recent research had found genetic evidence in a Homo sapien's skull from a site in the Czech Republic -- around 400 kilometers (248 miles) from Einhornhöhle -- that suggested the individual had some Neanderthal DNA, This raises the possibility early modern humans and Neanderthals had interbred more than 50,000 years ago.

"Given this early exchange of genes, we cannot exclude a similarly early exchange of knowledge between modern human and Neanderthal populations, which may have influenced the production of the engraved artefact from Einhornhöhle," she wrote in the commentary.

"The possibility of an acquired knowledge from modern humans doesn't undervalue, in my opinion, the cognitive abilities of Neanderthals," she wrote.

"On the contrary, the capacity to learn, integrate innovation into one's own culture and adapt to new technologies and abstract concepts should be recognized as an element of behavioural complexity."