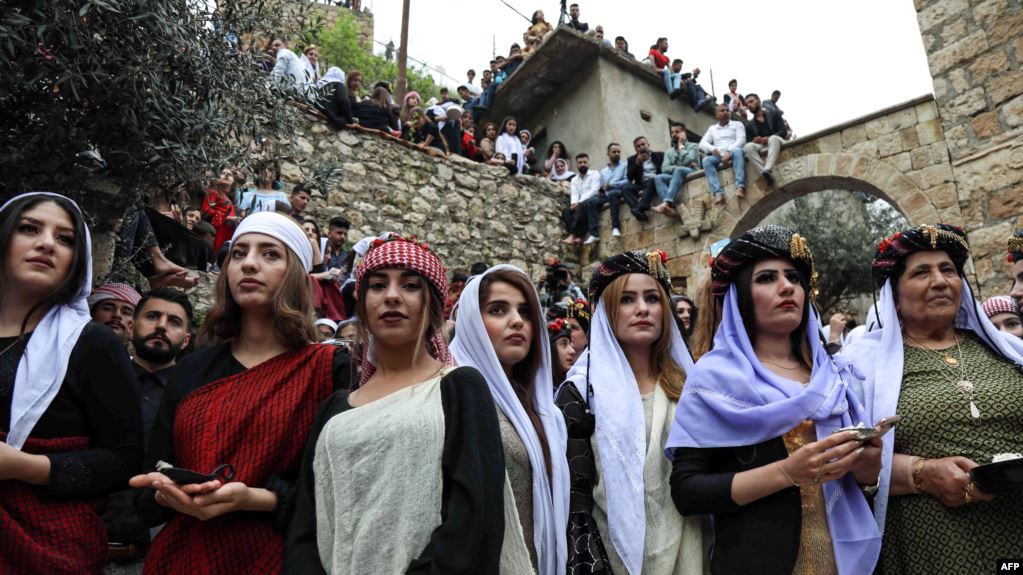 After ISIS terrorists' attack on the city of Mosul and taking control of the city, on 3/8/2014, the terrorist groups attacked the district of Sinjar and immediately began to carry out massacres against the Yazidis and looting and robbing their homes and the abduction of their women and children.

Who are the Yazidis?

The Yazidis came into being in Iran more than four thousand years ago, and are considered a non-missionary and closed religion, as no one outside of this religion can embrace it.

The Yazidis believe in one God, praying to him, taking the sun their Qibla, in addition to believing in seven angels, the most important and the first one of them is Melek Taus or King Peacock.

The Kurdish-speaking community often relies on agriculture; most of them are living in Sinjar district.

The most sacred religious site of the Yazidis is the Lalish Temple, which is topped by a stone cone dome along with several shrines in the middle of a mountainous area with natural springs in northwestern Iraq, and the believers visit it barefoot.

They follow the Supreme Spiritual Council, which is composed of five members and is based near the Sheikhan area, among them is the "Emir" of the Yazidis in the world, in addition to their religious Marja' Baba Sheikh.

The Yazidis are divided into classes: the "sheikhs", the "Pir" known as the preachers and the "Murid", one class cannot marry a different class or anyone outside the religion.

Over time, the Yazidi incorporated elements of other religions in their faith.

For example, children are baptized in holy water to celebrate their entry into the faith like the Christians, and men can take four wives like the Muslims.

About 1.5 million Yazidis exist in the world, the largest number, 550,000, lives in Iraq, with fewer numbers in Kurdish-speaking areas of Turkey and Syria.

Decades of immigration resulted in the arrival of large numbers of Yazidi to Europe, especially Germany, which houses about 150 thousand members of this community, as well as Sweden, France, Belgium and Russia.

But since the invasion of Sinjar by ISIS terrorist organization in 2014, nearly 100,000 Yazidis have migrated from Iraq to Europe, the United States, Australia and Canada.

Some 360,000 people still live in IDP camps, and only a few thousand have been able to return to Sinjar where most homes are still destroyed, electricity, clean water and hospitals are scarce.

The day of the attack

Giyath Surchi, Media Official of the Nineveh Organization Center of the Patriotic Union of Kurdistan told PUKmedia: "At dawn of August 3, 2014, after the ISIS terrorist organization controlled the city of Mosul and the Tal Afar district, the terrorist groups began attacking Sinjar. Unfortunately, the Peshmerga and other security forces withdrew from the city for several reasons; the most important was the geographical aspects of Sinjar district and its rugged areas and the absence of any boundaries with the Kurdistan Region."

He added: After the attack, civilians began to flee to Mount Sinjar and some of them fell in the hands of the terrorist groups, where terrorist groups have committed genocide against the innocent Yazidis.

Surchi said more than 200,000 people had fled to Mount Sinjar, which is 72 km long, and reaches Syria. There a Human tragedy happened due to the lack of food and basic supplies, killing many children, the elderly and the sick.

He continued: After a week, the forces of the People's Protection units in cooperation with Peshmerga of the Patriotic Union of Kurdistan, attacked the ISIS terrorist organization and opened a road to western Kurdistan, where the families stuck in Mount Sinjar were able to cross the border and reach Syria and then returned to the Kurdistan Region.

Causes of falling of Sinjar

He pointed out that one of the other main reasons for the fall of Sinjar, is that the large army forces, which was in the province of Nineveh left its heavy weapons to the ISIS terrorist organization who used in the attack on the district of Sinjar, so the Peshmerga forces could not resist and withdrew to the Kurdistan Region.

According to the statistics of the General Directorate for the affairs of the Yazidi in the Ministry of Endowment and Religious Affairs in the Kurdistan Regional Government, about 1280 Yazidis have been killed on the first day of the attack on the district of Sinjar, and more than 2,300 children have been orphaned, and about 70 shrines were destroyed.

The terrorist organization also abducted more than 6,400 Yazidis, mostly women and girls, 3,400 of them survived.

After the terrorist organization lost its last stronghold in Syria, dozens of Yazidi women, girls and boys were freed and reunited with their families and the rest are still missing.

Compensation of the victims

"To date, the Kurdistan Regional government and the Iraqi federal government have not given any positive steps to shoulder their responsibilities towards the Yazidi and their cause," says Yazidi activist Khaled Taalo al-Qaedi.

He added: "Until now, there has been no official recognition that the Yazidis have been subjected to genocide, and there is no real contribution to save what can be saved. Even after the defeat of ISIS in the Tazidi areas, there are political conflicts in our regions. Our regions suffer neglect, marginalization and lack of seriousness in the reconstruction of those areas."

He continued: "For more than two years, Sinjar areas were almost isolated from the whereabouts of Yazidis in the camps of the Kurdistan Region and there are now more than three thousand Yazidis unaccounted for and there are no positive steps, especially by the federal government in the search for them."

Demands of the Yazidis

al-Qaedi said: "The most important demands of the Yazidis are to end the political conflict in Sinjar and to reach radical and quick solutions in the election of a fair government and administration, start rebuilding and reconstructing the Yazidi areas and form a local government elected by the people of the district for the administration of Sinjar without being affiliated with a particular political or partisan party."

He explained: "the formation of an immediate committee to search for the fate of more than three thousand Yazidis, and the return of displaced persons to their areas without delay and compensation of the affected and the recognition that what happened to them is genocide and allocate financial support for them by the federal government according to the degree of damage inflicted on them."

The day the Yazidis genocide was recognized

On the 5th anniversary of the heinous crimes carried out against the Yazidi Kurds, Kurdistan Parliament held its regular session to vote on the draft law proposal for naming August 3 the Genocide Day of Yazidis.