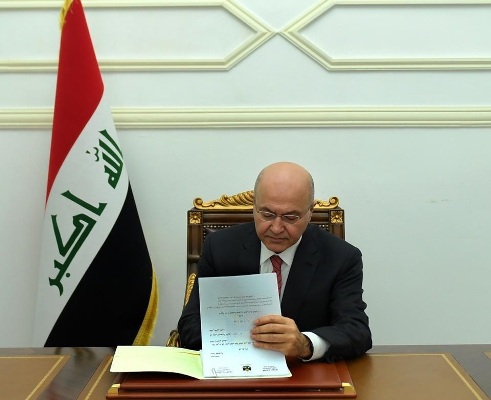 The Presidency has sent the Yezidi female survivors’ bill to the House of Representatives for the purpose of discussing and approving it.

The bill includes the Yazidi women who were kidnapped by ISIS terrorist gangs after June 10, 2014 and then released.

The draft law aims to compensate the female survivors financially and morally as well as rehabilitating and taking care of them in addition to providing them with a decent life.

The bill also aims at adopting the means to integrate the female survivors into society, and rehabilitate the infrastructure of their areas.

The draft law, which was sent to the House of Representatives on March 28, 2019, stipulates the establishment of a General Directorate affair for caring about the female survivors, and is associated to the General Secretariat of the Council of Ministers, and based in Nineveh Governorate.

The Directorate shall prepare statistics, prepare data on female survivors, and provide the necessary care for them as well as providing them with safe haven and suitable accommodation for sheltering them, creating educational opportunities for survivors and their children, and securing employment and operation opportunities to empower them to achieve the economic and social well-being in addition to opening health centers and clinics to treat them psychologically, socially and vocationally.

The Directorate also addresses the legal status of children born from surviving mothers in accordance with the law.

The draft law has granted the female survivor who is covered by the provisions of this law, a monthly salary of no less than twice of the minimum pension stipulated in the Unified Retirement Law No. (9) of 2014, as well as granting them a piece of residential land except for the provisions of the laws and decisions of the (dissolved) Revolutionary Command Council or a free of charge housing units.

The bill allowed those returning to study to be exempted from the conditions of age and average of grades, and shall be given priority in the appointment for the State’s public employment.

The draft law considers that (3/8 /) of every year as a National Day to highlight what had happened to the female Yazidis of crimes, and that media outlets provide the visual, written, and read with programs specially made for this date to illustrate what the groups of terrorism have done of abuse, oppression, exile, and forcible displacement of female Yazidis. And that the Ministry of Culture, the Mayoralty of Baghdad and the respective authorities shall take the necessary measures to perpetuate the victims of the Yazidis and to establish monuments, statues and exhibitions on this occasion.

The draft law stipulates that the perpetrators of the crime of abduction and enslavement of the female Yazidis shall not be included in any general or special amnesty and shall not be deprived of the penalty prescribed by law.

The judicial and administrative authorities shall follow up the arrest of the perpetrators and accomplices in the commission of such crimes and to apply the provisions of the law.

The project considers that the crimes the female survivors were exposed to as genocide crimes to be defined in competent international forums and organizations as well as instituting criminal proceedings against the perpetrators.