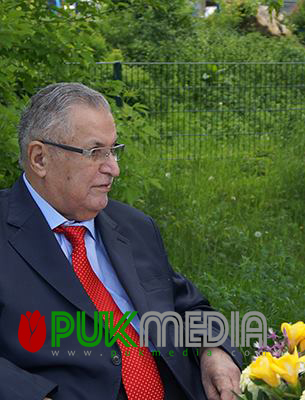 After five months of absence, Jalal Talabani President of Iraq had appeared in photos for the first time since he left the country to Germany for treatment.
These photos shows the President Jalal Talabani seated with his German medical team in the hospital's garden where he is treated and Dr. Najmaiden Kareem member of the political bureau of the Patriotic Union of Kurdistan, and the one who is authorized to give statements about the health of His Excellency President Jalal Talabani.
The German medical team had held a press conference with the participating of Najmaiden Kareem regarding the latest developments of the President's health status, the team had confirmed that the health of President Talabani is very good and continuously improving; he is responding to the treatment and reacting very well compared to his condition five months ago. Kareem stressed that the President's health is improving day by day for the better.
The medical team had confirmed that the President's memory is very good. Regarding Jalal Talabani's return to his homeland, doctors confirmed that the President will return to his home as soon as he compete his treatment.
People had expressed their happiness to see the President's photos which were published on Friday 17-5-2013, wishing him a speedy recovery and a quick return to his homeland. Very large number of people in Kurdistan Region had left their homes to the streets to calibrate the good news regarding their President's health as well for his new photos.
PUKmedia