Lady Adela Jaff or the Princess of the Brave 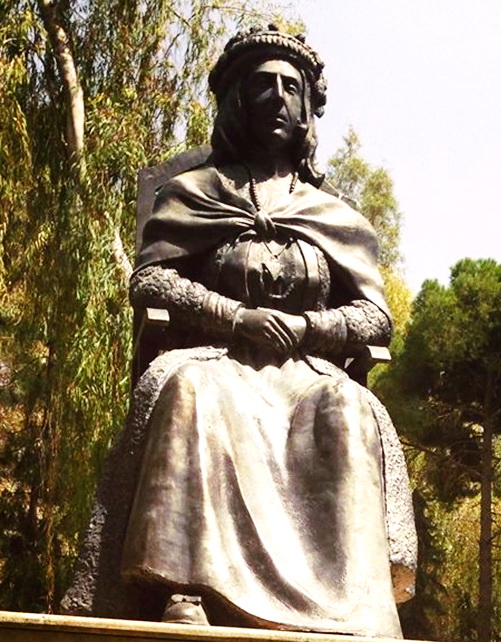 Lady Adela Jaff or the Princess of the Brave

Lady Adela Jaff or Adela Khanem, called the Princess of the Brave by the British army, was a famous and cultured chief of the Jaff tribe, the biggest Kurdish tribe in its time, and wife of Kurdish King Osman Pasha Jaff. Adela Khanem was of the famous aristocratic Sahibqeran family, who intermarried with the tribal chiefs of Jaff.

She was born in 1847 to a leading family in Sanandaj, the major center of Kurdish culture in Iranian Kurdistan. Later Osman Pasha Jaff was appointed the kaimakam of Sharazor, title used by the Ottoman empire meaning representative of the Sultan, thus allowing Lady Adela to take over. The revival of commerce and restoration of law and order in the region of Halabja is attributed to her sound judgment. She was known for saving lives of many British army officers during World War I and was awarded the title of Khan-Bahadur , meaning sovereign ruler, by the British commanders.

Even when her husband was still alive, it was Lady Adela Jaff who gradually assumed effective authority. Upon Osman Pashas death in 1909, she remains firmly in control, and her authority wen unchallenged until her death in 1924 in Halabja, Kurdistan.

Gradually the official power came into her hands. Osman Pasha Jaff was often called away to perform journey in the cities of Sulaimania, Kirkuk, and Mosul to handle matters of government and affairs. So Lady Adela, governing for him in his absence, built a new prison, and instituted a court of justice of which she was president, so it consolidated her own power, but the Pasha, carrying out local improvements, while his wife ruled.

Lady Adela’s husband, Osman Pasha Jaff, appears to have quite happily consented to her assertiveness, his subjects must have been fascinated by his strong-willed and urbane personality in her midst. The Ottoman Empire authorities, perceiving an increase of Persian influence in Kurdistan, were not amused but there was little they could do about it. They put up a telegraph line in the city of Halabja, in order to improve their control of the place, but the Jaff tribe objected and cut down the line. Lady Adela told the Ottoman Empire officials not to repair it, threatening that the wires would again be cut, and thus she managed to keep those improved communications and Ottoman control at a distance. (Soane 1926: 220)

Gertrude Bell, British politician and writer, describes Adela Khanem Jaff in a letter in 1921 as follow: " The feature of Halabja is 'Adela Khanum the great Jaff Beg Zadah lady, mother of Ahmad Beg. She is the widow of Kurdish King Osman Pasha Jaff, sometime dead, and continues to rule the Jaff as much as she can and intrigue more than you would think anyone could, and generally behave as great Kurdish ladies do behave. She has often written to me, feeling, I've no doubt, that we must be birds of a feather, and I hastened to call on her after lunch. She is a striking figure in her gorgeous Kurdish clothes with jet black curls (dyed, I take it) falling down her painted cheeks from under her huge headdress. We carried on in Persian, a very complimentary talk in the course of which I managed to tell them how well 'Iraq was doing under Faisal and to assure them that all we wished was that our two children, 'Iraq and Kurdistan, should live in peace and friendship with one another". Vladimir Minorsky has reported his meeting with Lady Adela in the region of Halabja in 1913.

British author Ely Banister Soane wrote about her in his book To Mesopotamia and Kurdistan in Disguise: "a woman unique in Islam, in the power she possesses, and the efficacy with which she uses the weapons in her hands.... In a remote corner of the Turkish Empire, which decays and retrogrades, is one little spot, which, under the rule of a Kurdish woman has risen from a village to be a town, and one hill-side, once barren, now sprinkled with gardens; and these are in a measure renovations of the ancient state of these parts."