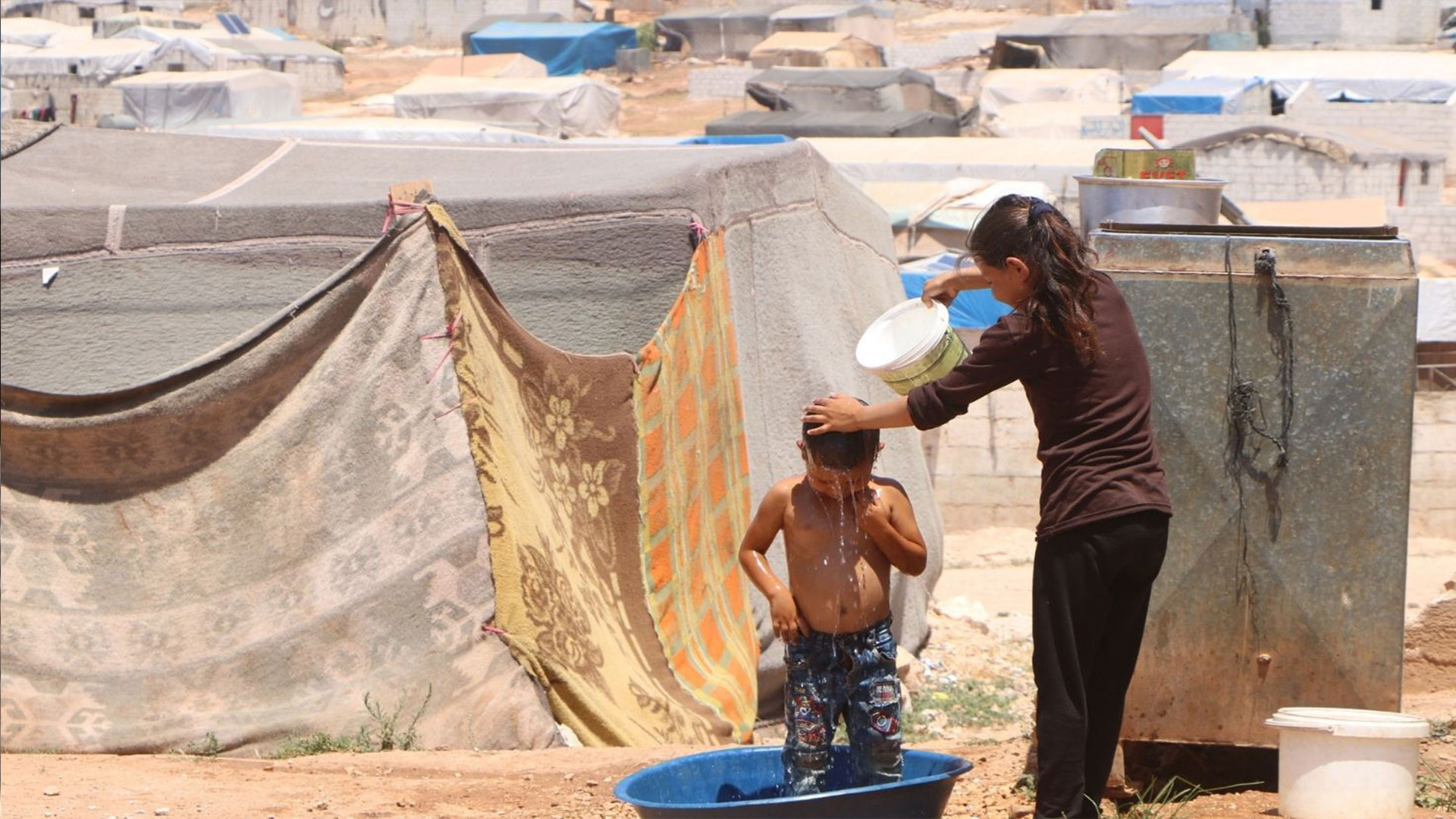 In the hot weather that gets over 40C°, accompanied by his children, Imad al-Hassan, 40, sits in the shadows of his tent to escape the high temperature flaming outside the tent.

Despite his worthless efforts, but the man, who is an IDP from Deir Hafir in Aleppo southeastern countryside, does not have any other choices in light of the absence of electricity.

At a time where heat degrees in some areas reach up to more than 50 and the country is witnessing unprecedented heat wave, IDPs of Manbij camps spend their lives in light of electricity and water shortage.

“The generator feed the camp with electricity for only eight hours while public electricity is unavailable” says al-Hassan who was displaced 5 years ago.

Insufficient amount of water comes by water tankers which the IDPs await to get 35 liters for each individual, according to an IDP.

Cooling means are limited to fans distributed last year, but even the fans do not help much since the air produced by them is very hot, the IDPs said.

Squatter camps are inhabited by 1.935 families in total of 9.786 individuals who come from the same above-mentioned areas, according to the camp management.

Since 2017, most of the residents of the town of Maskanah and the city of Deir Hafir in the eastern and the southeastern countryside of Aleppo Governorate have been displaced. This displacement came after Syrian government forces took control over the area following battles with the Islamic state Organization (ISIS).

Children are seen at noon, in Manbij New Eastern Camp, sitting in the shades of the tents, and others trying to wet their clothes using water in order to decrease the flaming heat on their bodies, while the women are rushing under the blaze to bring water from water tanks, which makes them defenseless against sunstroke.

The IDPs are demanding the camp management and humanitarian organizations (NGOs) active in the area, in light of this difficult situation, to provide the required aid such as air conditioners and increase water amounts as well as electricity hours.

Yasser Mesto, however, an official in Manbij New Eastern camp, said that they are providing the aid according to the available sources.

He did not deny that the services are insufficient. He requested the humanitarian organizations to aid the management so they can provide the IDPs with their needs.

Mo’taz al-Othman, 50, an IDP from Maskanah, finds difficulty in coping with this “dystopia.”

While sitting in his tent, the man says that camp residents should not be involved in the political updates to avoid their suffering, referring to al-Ya’rubiyah (Tel Kocher) border crossing.

Al-Ya’rubiyah crossing, which is located on the Syrian-Iraqi border, was closed due to a Russian-Chinese veto in the UN Security Council in early 2020.

The closure of the crossing continues which prevents the entry of humanitarian aid; the matter puts humanitarian pressure on IDPs in Autonomous Administration of North and East Syria (AANES) areas.

The AANES was first formed in 2014 in the Kurdish-majority regions of Afrin, Kobani and Jazira in northern Syria following the withdrawal of the government forces. Later, it was expanded to Manbij, Tabqa, Raqqa, Hasakah and Deir ez-Zor after the Syrian Democratic Forces (SDF) defeated ISIS militarily.